11 Similarities and Differences between Cryptocurrency and Fiat Currency

The proliferation of cryptocurrency in today’s world has speculated much discussion about how it will replace conventional fiat currency. Due to the increasing usage of cashless transactions, cryptocurrency organisations are ever-adapting to meet the needs of an ideal future – A safe and secure, highly efficient and responsive, cashless society.

People prefer to make payments and transfers using cashless technologies, like that of cards, internet banking, payment apps and so on. It’s only safe to say that the world is progressing into a cashless economy.

According to Deutsche Bank, cryptocurrency is likely to replace fiat currencies by the year 2030. Prominent figures of modern business-like Jack Dorsey, the head of Twitter and the co-founder of the Apple corporation, Steve Wozniak have expressed that they hope to see cryptocurrencies becoming the native currency of the internet.

First, let’s delve into what are Fiat currencies and Cryptocurrencies.

Fiat Currencies are national currencies that are issued and regulated by government authorities and central banks. As much as they act as legal tender, they are not backed by a commodity like gold or silver. The value of fiat money is based on the public’s faith with the currency’s issuer. This is your US Dollar, Euro, Indian Rupee, etc.

Cryptocurrencies on the other hand are digital assets designed to be used for direct transactions between parties without any intermediaries such as banks or governments. Cryptocurrencies work on blockchain technology, therefore making it decentralized and highly secure. Some examples of cryptocurrency are Bitcoin, Ethereum and of course, Decentrahub coin. 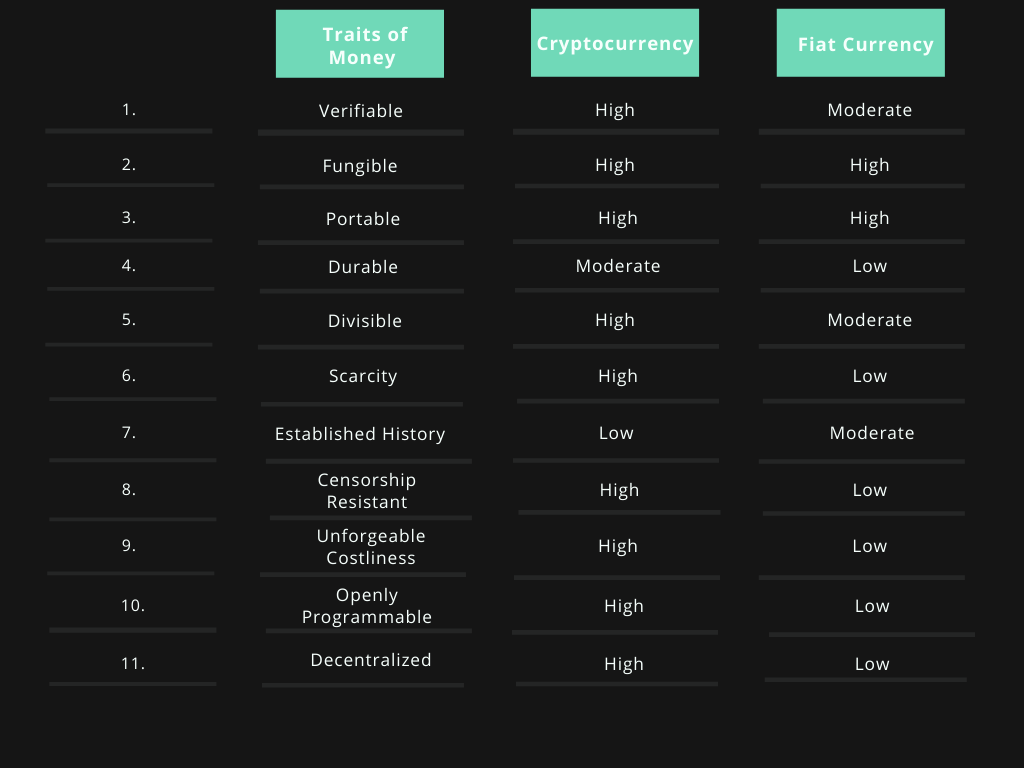 Verifiable: Cryptocurrency transactions are extremely secure. It is nearly impossible to hack into a block so as to meddle with the transaction. Since it’s on a globally accessible digital ledger aka a blockchain, it is verified with secured data hashed into the block.

Fungible: “Fungibility is the property of a good or a commodity whose individual units are essentially interchangeable and each of its parts is indistinguishable from each other.”

In this case, both cryptography and fiat currency are highly fungible. Fungibility implies equal value between the assets.

Portability: To access or carry your cryptocurrency around, all you need to do is to check on your crypto wallet with your mobile device or CPU.

Fiat money is equally portable as you can carry cards, use mobile apps or internet banking to access your money.

Durability: The only way cryptocurrency may be less durable is when you store your ledger in a physical hard drive like a pen drive or a hard disk. This makes it susceptible to damage or even loss.

When it comes to fiat currency, If we consider paper money, the likelihood of it getting damaged is quite high if not stored safely.

Our conventional fiat currency also has denominations. But certainly not as much as Bitcoin.

Scarcity: This is probably one of the most appealing factors of cryptocurrency. With Bitcoin, there is only going to be only 21 million Bitcoin to be mined. Thus making it even more valuable than gold. This also means that it is a deflationary currency.

However, fiat is an inflationary currency. Government and central financial institutions can always print more money, furthermore reducing its value.

Established History: Cryptocurrency transactions are relatively new to the economy. Some crypto experts relate this time we are in, to the inception of the internet phase or the pre-email phase as it is not completely adopted by the mainstream yet.

The first banknote type instrument was used in China in the 7th century during the Tang dynasty. Merchants would use promissory notes instead of exchanging bulk copper coinage. You can say this is not as old as other means of exchange.

Censorship Resistant: Another alluring characteristic of crypto is that your coin is always safe with you since there can not be any intervention in the transaction. Since the system is decentralized, authorities have no say in the matter.

With conventional currencies; your bank accounts, assets and other investments can be seized and or frozen for whatever reason may be.

Unforgeable Costliness: Here we refer to the cost of forging currency. As we all know It is impossible to forge cryptocurrency because of its secure encryption.

However, as mentioned earlier, counterfeit money is plenty.

Openly Programmable: Cryptocurrencies and blockchain technologies work on open source code which means anyone can fork the algorithm or make adaptations and create their own AltCoin.

Fiat money is issued by regulatory bodies. So if it’s not sanctioned by the authorities, it is not a legitimate asset.

Decentralized: Like being openly programmable, the decentralized system is a 21st-century application. Since cryptocurrency works on blockchain technology, it is fundamentally decentralized and not owned by an intermediary.

Fiat Currencies are the polar opposite. All fiat money in circulation can be monitored and regulated by authorities.

It is only a matter of time that cryptocurrencies find their way into conventional undertakings. Although it may take time for it to hit the mainstream due to strong opposition from some financial authorities, crypto users recognise how autonomous institutions play a significant role in modern-day transactions and security.

Being a powerful creed, the crypto-social economy will certainly see through the cracks of the current economic system with a new and trusted global peer to peer credibly neutral monetary system.

DISCLAIMER
This article does not constitute investment advice, nor is it an offer or invitation to purchase any crypto assets.
This article is for general purposes of information only and no representation or warranty, either expressed or implied, is made as to, and no reliance should be placed on, the fairness, accuracy, completeness or correctness of this article or opinions contained herein.
Some statements contained in this article may be of future expectations that are based on our current views and assumptions and involve uncertainties that could cause actual results, performance or events which differ from those statements.
No one of Decentrahub nor any of its affiliates, advisors or representatives shall have any liability whatsoever arising in connection with this article.
Please note that an investment in crypto assets carries risks in addition to the opportunities described above.